Quartz Crystals - Their Identification and Meanings

Quartz Crystals - Their Identification and Meanings

Click on a letter to find a crystal type, inclusion, or shape

Then, click any link in the guide for photos and metaphysical properties

(you may also scroll down to see the index table)

Quartz crystals are natural modulators, transmitters, and containers of the Universal Life Force.  As they are grown within the earth, they take on a unique shape and often gather inclusions of other minerals that affect their abilities to modify, store, and transmit the Life Force.

In this index we offer here a constantly updated and every growing but always seemingly incomplete listing of quartz. This index includes quartz shapes, inclusions, and crystal arrangements, along with their generally accepted definitions and metaphysical properties. .

Here Amir Akhavan has a wealth of material on forms, shapes, varieties, and the chemistry of quartz. He has extensive photos of unusual formations of quartz. Very well researched and a vertible goldmine for the quartz enthusiast. Highly recommended.

This is the on-line mineralogical database used by the world as the "go to" resource for mineral data. 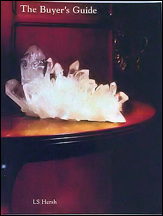 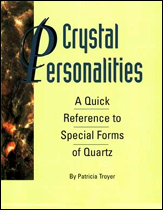 There are many viewpoints in the world, and you must sift through them to find your truth. What is right for one person, is not necessarily what is best for another. Also, be aware that a crystal formation may well be good for something for most people, but others may have discovered new energies and uses.

For example, a cabinetmaker may well see a screwdriver as a tool used to install and remove screws. He or she is right. However, a painter may see it as an excellent paint can opener. Both are right. The list is a starting point on your voyage of discovery.