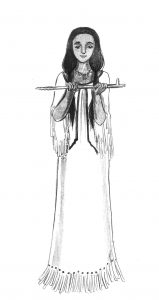 Whope is the Lakota Sioux Goddess of Peace. She is a Star Maiden.  Her father is the Sun, Wi, and her mother is the Moon, Hanwi. She married Okaga, the South Wind, after being wooed by each of the Winds.

Her father is the reason why she is a goddess. He wanted her to become a mediator. So to fulfill this desire, he gave her powers like a goddess and responsibility over assuring the harmony of life on earth. Whope  is the goddess of not only harmony, but  also of meditation and friendship.

At one point in time she gave her people of the west, the Dakota, a pipe to symbolize peace. This may the origin of the peace pipe. She taught her people a ceremony on how to send their messages using the peace pipe to the great Wanka Tanka. The great Wanka Tanka is essentially the God Spirit of the Sioux.  This is the story of the White Buffalo Calf Woman who brought the spirit of the Buffalo to the Sioux and taught them the proper ways to pray and live.

Her name means “Meteor.” Sometimes she is called ”Falling Star” because as each star falls she can grant a wish or mediate a problem between friends. Perhaps our practice of making a wish on a falling star is based on the Sioux honoring of Whope.

Whope is strongly associated with Turquoise.  Turquoise is used for healing, bringing rain, and personal protection.  You can also honor Whope with Chalcedony, helps promote friendships and is considered a sacred stone by native Americans.