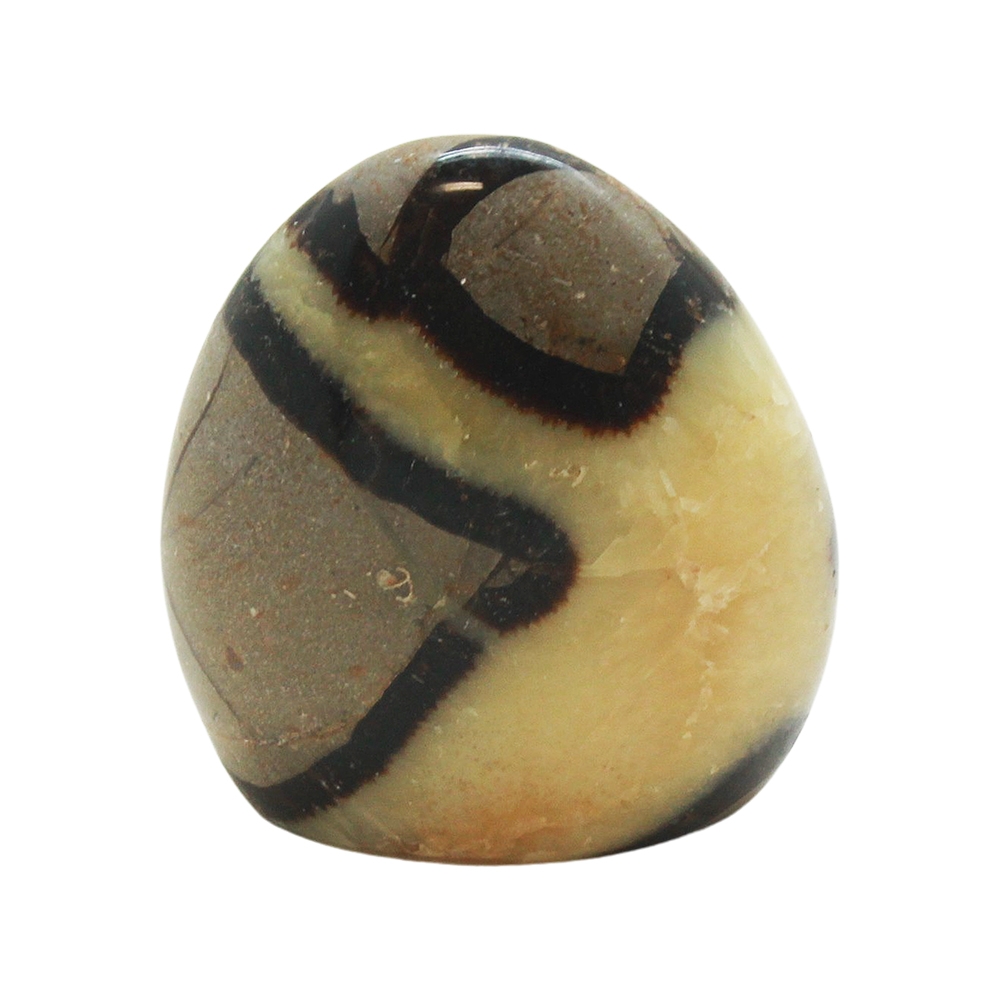 Septarian is a beautiful crystal that is millions of years old. It holds a piece of time and wisdom within its swirling interior. If you're interested in learning about Septarian stone properties and meaning, you've come to the right place! We'll discuss Septarian's origin and how it can help you in your daily life.

Septarian is a mixture of Aragonite, Calcite, and Limestone. The name Septarian comes from the Latin word septem, meaning seven since it seems to form in patterns of seven. The yellow colored material is Calcite, the brown is Aragonite, and the outer grey is Limestone. Some specimens may include white or clear Barite as well. The energy is pure Earth brown. It is a calming meditation crystal and an excellent stone for removing stress and anxiety. 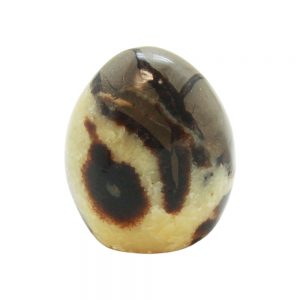 Septarian is believed to have formed during Earth's Cretaceous Period, which was roughly 50-60 million years ago. During this time, sea levels were much higher in places like southern Utah and Madagascar where this stone is found. Since much of the Earth was underwater, so were many of Earth's volcanos. As such, underwater volcanic eruptions happened from time to time.

When these eruptions would happen, it would wipe out any nearby sea life and all of their matter would fall to the seafloor. The minerals from the shells and prior life were attracted to the seafloor sediments and formed together to make nodules. Over time, as more sealife passed, they settled to the ocean floor where they would get mixed with the nodules even more.

After the oceans eventually receded back, we were left with these beautiful formations of Septarian nodules. The water dissipated and the formations began to dry. The minerals from all of the past sea life then crystallize and form Aragonite and Calcite crystals.

Since Septarian is formed from Aragonite, Calcite, Limestone, and sometimes Barite, it naturally takes on all of these healing properties of those individual crystals. We will discuss each of those briefly and then explain the metaphysical properties of Septarian itself.

Aragonite: Aragonite is a healing stone that is excellent for removing stress and anxiety. It is a calming meditation crystal and it brings solid Wood Energy into a room or life.

Calcite: Calcite is a stone of spirituality, amplifies and clears the energy field, and helps memory. It is also reported to cure resentment and animosity and can also be used for strengthening character, fighting bigotry, and sexism.

Limestone: Limestone connects to the Root Chakra and is used to ground the body and spirit. It is a nurturing stone that can provide relief both physically and mentally. They are very supportive of change and great for emotional healing.

Barite: Barite crystals (also called Desert Rose) are excellent tools for grounding and harnessing Earth energy. It can clear blockages in the upper chakras allowing it to heighten your intuitive visionary abilities. 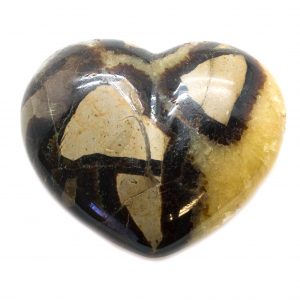 If you look at the properties above, you will notice a theme of grounding, centering, and strong Earth energy. As such, Septarian crystals are very strong conduits of Earth energy. They reduce stress, anxiety, and anger. They bring about feelings of understanding of the world around you and yourself. As such, they often make the user feel "lighter" and happier. Septarian stones will make you feel more connected with nature and Mother Earth. They are nurturing stones that make you feel loved, protected, and understood.

Due to their millions of years old status, it shouldn't be a surprise that Septarians are stones of wisdom. They are used by many healers to help connect with past lives and understand past lessons that may have been lost through time. Meditation with a Septarian over the third eye is said to invoke visions of past lives. You can also sleep with a Septarian underneath your pillow to help bring on dreams of past lives and/or symbolism that can be used to understand past lessons and current life situations.

Always stay up to date on crystals, sales, and more by joining our email list!

Posted in Blog and tagged septarian
← Uruguay Amethyst Crystals: A Unique Blend of Magic and MysteryCrystals for Workaholics →