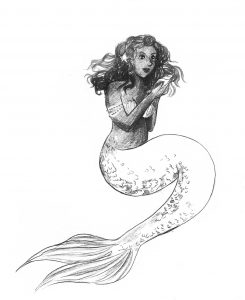 Yemoja is the African Goddess of the Ocean and the patron diety of pregnant women. She is honored not only in Africa but in Brazil. She is the creator goddess of the Yoruba tribe. This goddess went with the members of the Yoruba tribe when they were captured and taken to various areas in the world as slaves. She then became very well known and given different names. This is why she is honored in Brazil and also how she is associated with Virgin Mary.

Her followers all wear necklaces of seven blue beads and seven clear crystals alternating. Yemoja gave birth to all the waters and is known as the “mama watta”. Her name is a contraction of Yoruba words,”Yeye emo eja” which means “Mother whose children are like fishes.” Her parents are Oduduwa and Obatala. She married Agayu and they had one son, Orungan, and fifteen Orishas.

She is different then most goddesses because she is, in fact, a mermaid. Her symbols are seashells, coral, a gourd rattle, an anchor, a key, and turquoise. In the Umbanda religion, they worship her as one of the seven orixas of the African pantheon. She is known to them as the Queen of the Ocean. Yemoja is the patron of women, particularly pregant women; fishermen; and sunken ship survivors.

Yemoja created a tribe and gave birth to all the water, salt and fresh, so she became a goddess. Call upon her when you want to connect to your inner child. She can help you imagine that you too are a mermaid and can have fun. She can show you that having fun is important in life just as it is for working.

Use necklaces of seven turquoise beads and clear quartz beads to honor Yemoja.  Pregnant women should wear such a necklace as a talisman of protection for the unborn baby.  Place turquoise along with seashells and coral on her altar.