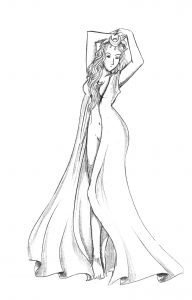 Once her brother, Helios, finishes his journey across the sky, Selene rises from the ocean riding a silver chariot with two winged steeds starting her journey across the sky.  She is usually depicted as wearing a crown of the crescent moon, clothed in long robes and sometimes carrying a torch.  I however see her as a young woman enjoying her femininity.

Legend has it that she fell in  love with the mortal Edymion, who was most likely a shepherd she observed in one of her nightly crossings of the sky.  She was so in love with him she wanted him to live forever.  But learning from her sister, Aurora’s error, and not wanting to end up with a grasshopper, she allowed him to ask Zeus for his own fate.  He chose to live forever by sleeping away eternity.  It seems he must awake occasionally, because this fate didn’t stop him from being the father of her fifty daughters who represent the lunar months that elapse between each occurrence of the Olympic Games.

Selene is a caring, responsible young woman who respects her responsibilities bringing her light to the night.  She can help us all bring the power of light into our times of darkness.

As the Moon Goddess, Selene is honored by many cultures.  Her travels across the sky help guide and protect those who find themselves in the dark.  Women in particular associate with Selene, seeing in her the mystery and romance of the evening.

Moonstone and Selenite are excellent crystals for honoring Selene.  Moonstone shimmers with her passage.  Selenite, named for her because of its blue white silvery appearance is an inexpensive crystal that is well worth adding to your collection.  Use either of them by holding them in your hand under the moonlight while asking Selene for her blessing on your life and romance.