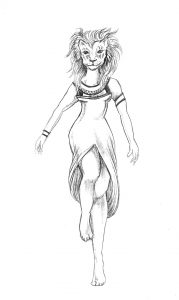 Sekhmet, the eye of the Sun God Ra, is “the mighty one”, the Goddess of the hot noontime sun, is one of the most powerful Goddesses of Egypt.  Feared as much as  respected, her fierce temper and hot blood were known to be deadly to those that did not honor her father.

She was born in some legends when Ra, angry with humankind for disrespect, ripped out his eye and threw it at the people in Memphis, Egypt. This eye then turn into the goddess Sekhmet, who in the form of a lioness, begin the revenge of Ra. She set about slaughtering and butchering the humans, then drinking their blood, enjoying every bit of it. Ra, seeing this, realized that she was going to kill the human race. His first attempt was trying to calm her but she refused to listen. So instead he tricked her into drinking the River Nile that he turned red by filling it with beer and pomegranate juice.  Sekhmet, thinking it was blood, drank excessively and fell fast asleep.

To this day she is honored and respected as a symbol of the power of the feminine.  While the stories tell of excess, the message is clear – women are powerful – and can be dangerous!

Sekhmet, while a fearsome warrior, was also the patron of physicians.  Even though she was powerful and a destructive force, she was a healer.  Her priests were considered some of the best physicians of their time.  In a way this is also power – showing Sekhmet to be a Goddess worthy of great respect.

Sekhmet’s name means “the Mighty One”.  She got the title of “Lady of Flame” because it was said that her body takes on the bright glare of the midday sun. It is also said that her hot breath is the desert’s wind. She is the burning, scorching, destructive heat of the sun, a powerful force to be respected.

Sekhmet is usually depicted with the head of a lion and the body of a beautiful woman.  Lions were very powerful beasts in southern Egypt.  As the most powerful goddess of Lower Egypt, Sekhmet was viewed as possessing the strength and power of the lion.

Sekhmet is honored to this day.  She represents the power and force that women can bring to bear when necessary.  She gives strength and confidence to young girls.  To honor her, and ask her blessings, use red crystals such as ruby, red agates, and garnets to appeal to her warlike aspect; bright yellow and orange crystals honoring her as “the lady of flame” such as citrine and orange calcite; and brown and tan colored crystals such as amber, topaz, and tiger eye honoring her association with the lion and its strength.  Place these crystals on a  small altar outdoors at noon to ask her for strength and power in your life.