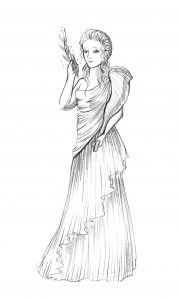 Shop Olive colored crystals to honor Pax
“All we are saying…is give peace a chance.” sang John Lennon. President Eisenhower said, “ I think that people want peace so much that one of these days governments had better get out of the way and let them have it.” Even back in the rule of Caesar Augustus, people were longing for peace when a temple was built to Pax, the Roman Goddess of Peace.

Daughter of Jupiter and Lustitia, Pax was a minor Roman goddess whose cult was acdtive during the reign of Augustus. Little of her cults practices and beliefs have survived, but we do know she was honored with several feast days and a festival in the early spring.

The cornucopia is the symbol of plenty and good harvest. Pax is sometimes depicted holding one. The symbology is that peace brings prosperity and a time of growth. Pax thus is the Goddess of Peace and Prosperity. She tells us that one brings the other.

While history gives us little to work with to understand Pax, nevertheless our hearts tell us a lot. We all search for Peace. In the 1960s the Peace Movement in the United States brought an entire generation to understanding how important peace is to all of us. We in the US today have our peace symbol, just as Pax was the symbol for the Romans.

Perhaps it is time to once again seek out Pax and honor her. She brings messages of hope, peace, and good fortune. She can be honored with a small altar that holds white candles and if you have an olive tree, some branches from it. If you don’t have one, olive colored stones such as Peridot are perfect. A peridot held in your hand will often be highly effective in bringing you a sense of peace. Try it.