Shop for crystals to honor Nisaba 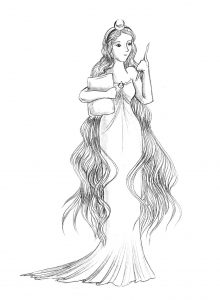 Nisaba is the Sumerian goddess of knowledge and grain.  The combination seems to be that she was the goddess of all grains and reeds, and writing was done with reeds.  She was the the patron deity of Unug, or Uruk, which at its height  c 2900 BC,  probably had 50,000–80,000 residents making it the largest city in the world at the time.

Nisaba is a powerful and well respected Goddess. Nisaba is an extremely distinguished Goddess the daughter of the sky god and  an earth goddess.  Her sister is Ninsun, or Nin-Isena, a well respected  healing goddess. She married Haya, the god of storehouses and they had a daughter, the goddess Sud. Sud changed her name to Ninlil when she married Enlil. She became the Mistress of the Underworld.

Some scholars think Nisaba’s name mean “Lady of Saba” but there is no record of such a city.

Nisaba was a writer, scribe, archivist, and even architect.  She kept a record of who entered her sister’s, Nanshe, temple. This made her the earliest goddess receptionist. She also helped Nanshe with the judgment of mankind every year and wrote down what happened. Nisaba was also goddess of the palace archives.

She once was an architect. Nisaba appeared to the king of her time in a dream. She did that so she could give him the specifications for a temple.

The Goddess Nisaba can help with academic work.  She can give you the gifts of reading and writing like she did for her people. Nisaba can also help interpret dreams and can help promote dreaming.

Her symbol is the inscribing stylus. She is depicted with long flowing hair and a tiara that consists of a crescent moon.

You can honor Nisaba and seek her help by using Rhodocrosite or Peridot.  Rhodocrocite affects emotion and can clarify or balance dreams. Peridot is the scholar’s stone that is an excellent aid to research and learning.

Shop for crystals to honor Nisaba