Shop Jade to honor the Moirae 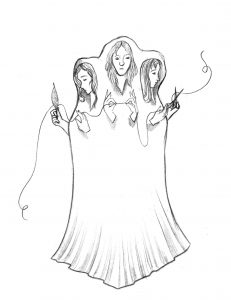 Also known as Moerae, in Greek mythology,the Moerae are three goddesses that are called the three Fates. Their parent is Nyx the goddess of night. Just like their mother they are feared by other gods and immortals. It is not clear just how the immortals were subjected to the Fates, but the histories tell us even Zeus feared them.

The name Moirae means “parts” since each of the goddesses has a different part to play in determining a person’s fate, or lot in life. The Moirae appears three nights after a child’s birth to figure out the course of the child’s life. They can seem cruel and heartless at times but it’s their job to decide people’s fates, and at birth each of us is destined for death.  The Moirae just look into the future to see what is in store.

The first of the Moirae, Klotho’s name meant “spinner”. She spun the thread of life of each child as it was born.

The second Moirae, Lakhesis’ name meant “apportioner of lots”. She measured the thread of life of each child.  In other words, she decided how much time each person had to live.

The third Moirae, Atropos’ name meant “she who cannot be turned”. Her job was to cut the thread of life that meant it was her job to end a person’s life.

These three goddesses are depicted as ugly hags who are cold and unmerciful.  In one story, they spun the thread of life of King Ademtus, measured it, and cut it off.  King Ademtus was best friends with Apollo. Apollo begged them to undo what they did. The Moirae told him they could not undo what was done.  But they promised him that if someone took the king’s place in Hades’ underworld home, the King might live again. Alcestis, the king’s wife, said she would take his place.  However, it turned out that Hercules was the king’s guest that day.  He went to the underworld and brought King Ademtus back.  It would seem that except for friends of Hercules, the rest of us are stuck with the fate we get from the Moirae.

Being very hard and unyielding, like the Moirae, Jade is the best stone to use to honor and attempt to influence the Moirae.  However, to be honest, probably you are as well off to just “Cast your fate to the wind.”

Shop Jade to honor the Moirae