Shop for Crystals to Honor Maat 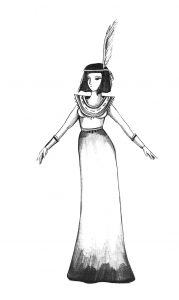 is the Egyptian Goddess that represents the underlying holiness and unity of the Universe.  She is  the Goddess of Justice, order and Harmony.  She is the opposite of chaos.

As the ancient legends tell us, her nickname is Mayet. She devoted her life to her husband Thoth. He was the guardian that hatched the almighty cosmic egg with a single sound that brought the  gods and goddesses to life.

Maat’s father is the supreme god Ra. He is the Sun God who created a golden age. The golden age is when mortals and immortals lived together on Earth.

Maat’s symbol is the majestic ostrich feather because the ostrich feather was considered to be the most accurate way to measure a persons heart as worthy when their fate was to be decided.

When a person dies Maat uses her scale and the feather to weigh their heart. If the heart is pure and contains no evil, it will balance with the feather and their soul (believed by the Egyptians to reside in the heart )is sent to the throne of Osiris, God of the Underworld. There they are welcomed to the After Life.

If the heart contains evil, and is out of balance with the feather of truth, then the soul is sent to the monster, Ammut. Ammut is part lion and part crocodile that devours souls.  Not a good ending!

In Egypt, pharaohs only ruled under Maat’s commands because they were responsible for assuring her influence continued to rule society.  Like back then, Maat has the power to help us maintain our balance of our lives.

Maat is the light brought to the world from out of the darkness as some of her followers say. She can bring light when it is needed to shine upon the darkness of ignorance and evil. You could call her a savior because that is basically what she does. Call upon her when Chaos, evil, and discord are in your life.  She will bring the unity of the Universe to your life.

Maat’s color is turquoise, which stands for balance, understanding, and flexibility.  She is also honored with Jade that brings strength and determination to any effort.

And remember, when you die, she will weigh your soul.  Don’t be out of balance.

Shop for Crystals to Honor Maat