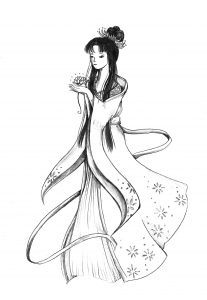 Ho Hsien-Ku is the Chinese immortal woman also known as the Health Goddess. She is one of the Pa-Hsien or eight immortals of Taoist legend.

As a child, Ho Hsien-Ku decided to live on Yun-mu ling. On this mountain there were stones called Yun-mu shih, “Mother of Pearl” or “mica.” When she was around fourteen or fifteen, a god came to her in a dream. He told her she must crush one of these stones and eat it so her body would gain great agility and be immune from death. Ho Hsien-Ku did what she was told and ate some powered mica.

As a result of eating the mica, as the god foretold, she did indeed  gain agility and immortality. For some reason that is not clear, she also vowed to stay a virgin.

While she lived on earth, every day she would go high up in mountains and bring loads of fruits to her mother.  As she was doing this, she found she was eating less and less.  Soon enough she gave up on ordinary foods altogether because she realized she didn’t need to eat in order to survive.

One day, the Empress Wu, hearing of her fame, sent a message to have Ho Hsien-Ku attend to the palace.  However, it seems disappeared on the way. What happened is that she disappeared from the view of mortals as she became one of the eight immortals and joined the gods in the sky.
After joining the gods, she was a nurse of T’ai Sui, god of heavens and time, who is connected with the planet Jupiter.

Ho Hsien-Ku is sometimes depicted with the musical instrument known as the Sheng. A Sheng is a free reed instrument consisting of vertical pipes. Sometimes she is also seen with a fenghaung bird to keep her company. The male fenghuang bird is called a Feng and the female is called a Huang. She is even seen with a bamboo ladle or fly whisk at times. Ho Hsien-Ku carries a lotus flower of caring, or the peach of immortality in her hands.

Because of her nursing of T’ai Sui, she is able to help heal most issues that occur in your life.  Whether it is a physical wound or an emotional wound, she can help. Ho Hsien-Ku can also bring happiness and luck into your life.

There are several beautiful forms of mica that can be used to honor Ho Hsien-Ku and to ask for her help in your life.  My favorite is Muscovite. It is pink and shimmers as you hold it.