Shop for Crystals to honor Hestia 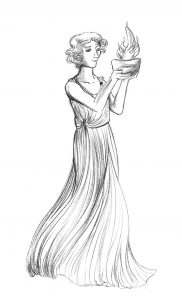 Hestia is a popular Goddess, our Goddess of Home and Hearth.  Her favorite color is red because it represents her element, fire.

In Greek mythology, Hestia is the eldest and youngest daughter of Cronus and Rhea. After her and her sibling were born, their father Cronus swallowed each and everyone but the youngest, Zeus. He later save his siblings and led them in war with Cronus and the Titans. Since Hestia was born and swallowed first she was the oldest, but also she was coughed up last making her the youngest. She was then called,”Hestia, First and Last.” Her brothers are Zeus, Hades, and Poseidon. Her two sisters are Demeter, and Hera.

Hestia was known as a forgotten goddess having given up her position of power to the newcomer Dionysus and returning to tend the sacred fires on Mt.Olympus.

Hestia with her sisters, Demeter and Hera, is one of the great goddesses of the first Olympian generation. Hestia was immune to the spells of Aphrodite. Apollon and Poseidon asked Hestia for her hand in marriage. She refused stubbornly and asked Zeus to let her remain an eternal virgin. He agreed and she took place at his royal hearth. She almost lost her virginity to Priapus when he tried raping her while she was sleeping. She woke up when his donkey started making loud noises and she screamed her heart out. The gods and other goddesses heard her and came to her rescue. Priapus then was scared and ran off.

Her Roman name is Vesta, Goddess of Fire. Both her names mean “the essence.”

She never left her home and never went out on adventures to explore the world. Hestia stayed at home, and is really the Goddess of Hospitality, who should be welcomed and honored in every home.  Being the tender of the sacred fires, she is associated with the warmth of the fireplace. Hestia gives us the security, peace, and comfort of being safely home and warm.

Two stones to represent the influential Hestia are the heart stone and red garnet. A heart stone is not a certain stone in particular. It is a stone you find near your home that seems to be “right” for you. You can take that stone you find and put it into your altar but you may not take it with you when you move. You have to return it where you found it.  In a new home, you must find a new heart stone for that place.

Red garnet is the other stone to use to honor Hestia.  It is the color of fire and is used for protection and strength. You should have a red garnet in your home near the fireplace to honor the Goddess of the Hearth, Hestia. Vanadinite is also excellent for honoring this Goddess. It is the color of home and hearth.

Shop for Crystals to honor Hestia