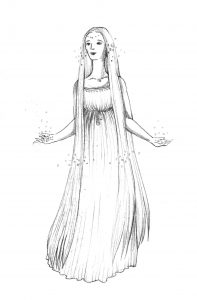 Hecate is a triple goddess. She forms a triad with Persephone and her mother Demeter. Persephone is the maiden; Demeter is the mother, while Hecate is the crone. She is the Thracian (Greek) Goddess of Hidden Wisdom, Witchcraft, and the Dark Moon.  She is the Goddess of the occult and the wisdom that comes with age.

Hecate has a number of legends. In one she is the protector of young children, sailors, and others.  In this role she had statues placed at entryways and cross roads.  In time this practice caused her to be considered the Goddess of crossroads.

She is also the Goddess of Ghosts. By protecting a place or crossroad from evil spirits, she became known as a Goddess that could control the evil spirits and ghosts.  She was believed to bea able to keep ghosts from causing mischief. Because of this relationship with dark forces, she became the Goddess of the dark moon (the side we can’t see). Hecate has the power of over heaven, earth, and the underworld and is referred to as the “Queen of Ghosts”.

She is known as the “liberator of women” because she sets women free from the bonds created by man.

Legend has it that people see Hecate walking the roads at night or visiting cemeteries during the dark phase of the moon. She is described as shining or luminous. Some people said she almost invisible, only glimpsed as a light luminous quality in the pale moonlight.

Hecate, with her deep knowledge, and power, shows us that the feminine should be valued for itself.  It is more than sexuality or power; it is an essence and an essential part of the cosmos.

Being the crone, Hecate can bring you protection, wisdom, and magic. She teaches her followers the paths of witchcraft.  These are the paths of freedom and power.

Jet is great material to use to seek the assistance of Hecate because, like her, it will ward off evil, lift depression and fear, and help balances emotions.

Black onyx releases negative energy and ends unhappy or bothersome relationships.  In fact, any black stone will be an excellent aid in seeking Hecate’s assistance.  Put one where your driveway meets the road to protect your home from evil.