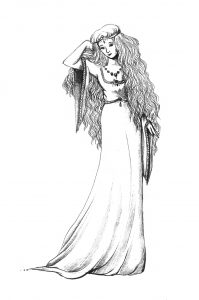 The most beautiful of the Norse goddesses, Freya is the goddess of Beauty and Love.  She is of the race of gods called the Vanir.   She is also a warrior, a chief of the demi-goddesses, the Valkyries, who select the noble and heroic dead and carry them to the Realm of the Gods. She is responsible for the souls of half of the warriors who died in battle and receives them in her hall, Sessrumnir.  Here she unites them with their faithful wives after death.

Freyja is a seeress – she taught Odin the practice of seither.  That is fortune telling by entering a trance and contacting the spirits to determine the future.  If you seek to learn the arts of divination honoring and calling upon Freyja can help you achieve your goal. You might honor her on Friday.  The day Friday (Frejyasdaeg) was named for her.

Freyja is also a tragic figure.  She once was so enchanted by a beautiful necklace called the Brisingame Necklace that she debased herself with the four dwarves that made it in order to possess it.  This betrayal of her husband was reported to Odin who ordered her to wear the necklace forever, but foretold that she would never again regain her husband’s love.

Freyja’s failure can teach us the need for controlling lust.  Having learned that lesson, she is a good teacher for everyone, helping us learn to control passions when we need to be faithful.  She is a good goddess to honor when you need to deal with problems of love.

The cat is her sacred symbol. Agates  are great for honoring and calling upon Freyja in your life.