Shop for Crystals to honor Ceridwen 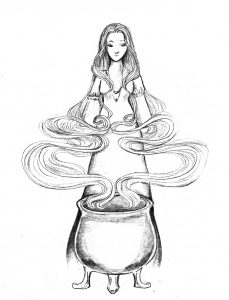 Cerridwen is the Welsh triple goddess. She is the Goddess of the cauldron and the moon. Her triad includes Blodeuwedd and Arianrhod. She is the keeper of the sacred cauldron of knowledge, wisdom, and light. Her potions are magical potions of divine wisdom and inspiration.

Cerridwen is the guardian of spiritual transformation. She rules the gifts of prophecy and magic and she powers death and rebirth. It’s said that she is one of the five goddesses of Avalon.

People have said that she lives on an island middle of Lake Tegid. Her husband was the giant, Tegid. They had two children, a beautiful daughter of light, Crearwy, and an ugly son of the shadow. The daughter was amazingly bright and very wise while her brother was dimwitted and unbearably ugly.  Cerridwen loved her son so much that she went to brew a magic potion of 6 herbs.  The first three drops of the brew would give him the secrets of the light and give him all knowledge and wisdom.

For one year and one day she brewed the potion in the cauldron. She had a blind man and a young watching and stirring the potion.  The final day the little boy was stirring the brew, a few droplets landed on his hand. He licked it up and instantly he gained all the wisdom that was for the son.

He ran in fear because the potion was now useless. Cerridwen chased after him changing shapes into the different creatures of the Earth. She finally caught him and ate him.  He was reborn 9 months later as Taliesin an honored Welsh poet and story teller.

Cerridwen teaches us that we are all really one with each other. She’s able to give you wisdom, power, magic, and protection. Her knowledge can teach you about magic and the power of unity.

To honor Cerridwen, and ask for her wisdom, use both a sunstone and a moonstone.  Carry the stones together for the wisdom and power of the sun combined with the harmony of her moon spirit.

Shop for Crystals to honor Ceridwen