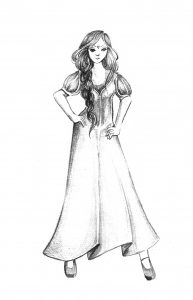 Banbha (Banba) the Irish Goddess of Sovereignty protects the land of the Irish people. Ireland could have ended up as “Banbhaland” but another other aspect of this triple goddess, Eriu, gave the Celts the name of their country. Banbha was the goddess wife of King MacCuilhe, the ruler of the Tuatha de Danaan – an ancient civilization of Ireland that was defeated by the Celts, or as they were called in legends, the Milesians. All three of the Irish Goddesses, Banbha, Eriu and Fodla asked that the land be named for them. It seems the Celts like “Eriu Land” best.

Banbha was a skillful magician who used her powers to protect her people and her land. In a way she is a Goddess of Protection. Banbha as the Queen of the Tuatha de Danaan people went out to meet the Milesian invaders when they first came to Ireland and tried to defeat them with her magic. She was not able to overcome them and the Milesian invasion succeeded. But it wasn’t without a fight. Just as she and her husband sought to protect their land from the invading Milesians, Bahbha can help you to protect what you value.

Banbha can inspire your leadership. With her help you can learn to lead people as they work together to protect their way of life. Banbha is an excellent inspiration to anyone who wants to be a part of defending their faith, their homeland, or their way of life.

Honor Banbha as you do other Celtic Goddesses by wearing an Emerald to bring her sense of honor and her leadership skills to you on a daily basis.