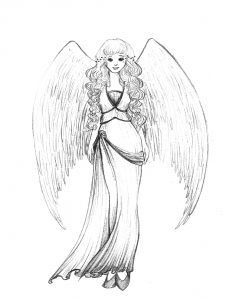 Roman Goddess of the Dawn, Aurora, was known to the Greeks as Eos. She is the daughter of Titan and Theia. Her brother is the sun, Helios, and her sister, Selene, is the moon.  She is the Goddess you need to bring the brightness into your life and love everyday.

When Aurora wakes up, feeling great about herself as usual, she flies across the sky, her wings leaving a trail of orange, red, and yellow so her brother Helios can ride his golden chariot across the sky bringing the sunshine to the Earth.

Aurora made one tragic mistake in her life.  Her love for the mortal, Tithonus was so great she asked Zeus to make him immortal.  Zeus agreed, but since Aurora had neglected to ask for his eternal youth, Titonus aged and eventually, the legend goes, became so dried up he became a grasshopper.

With Ththonus, Aurora had two children, Memnon and Emathion. Memnon grew up to be a great king of Ethopia, but was killed by the mighty Greek warrior, Achilles, in the Trojan War.  Still to this day Aurora is so upset over the death of her son that her tears regularly cover the Earth’s ground as dew.

Aurora is the mother of the Winds: Argestes, Boreas, Eurus, Notus, and Zephyrus.

Aurora was, it is said, cursed by Aphrodite to always be in love.  Well, I don’t think that is a curse.  Aurora can bring the beauty of the dawn to your love life each day.  Her passion can be yours. She is the goddess you should turn to if you want to keep your love alive every day.

Aurora loves the colors of the dawn, reds, oranges, and pinks, but all mixed together in streaks and clouds.  You will find such colors in agates particularly.  Seek out the ones that remind you of the dawn, and use them to bring Aurora and her awakening into your life and love.