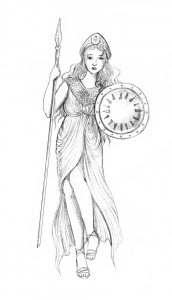 Zeus’ favorite daughter, Athena was born in an amazing way, and led an amazing life.  She is one of the three virgin goddesses, and considered by some the first “career woman.”  She took no lovers and was never wife to any God or man.

Athena’s birth was odd. It seems that Zeus believed he was to be overthrown as the King of the Gods by the son his wife Métis was carrying so he tricked her into turning herself into a fly then he swallowed her.  He had no worries of being overthrown, but he got major headaches.

The headaches were so bad that he went to Hephaestus to crack open his head. Hephaestus did was he was asked and suddenly out  leaped the beautiful, fully grown, battle dressed Athena. She was ready for battle right then and there!

Athena’s full name is Pallas Athena.  She added the name Pallas to hers after she accidentally mortally injured her friend Pallas during a practice session in her youth.

Athena is Zeus’s favorite daughter. She was the patron of the city Athens and spent a lot of time studying and mastering many areas of knowledge including law. She is known for her superb logic and intellect.   She was often called upon to act as a judge, and the legends abound of her fairness and wisdom.

Athena is the Goddess of war because she mastered all elements of war both tactics and strategy.  But she was not just an armchair warrior. Athena was also a skilled fighter armed or unarmed. She was a master of the weapons including sword, spear, and shield, and a great strategist.  Zeus so trusted her that she was constantly by his side, serving as his protector.

Athena who always wore her armor took delight in battle and combat. She is reported to have helped many gods and mortals in their battles and quests.  Often accompanied by Nike, she never lost a battle!

Athena is a superb role model for girls and women.  She was her own person, skilled, brave, and wise.  She made her own way in the world, and was not seduced by Aphrodite, the goddess of love.  She lived her life as she wanted to live it.  People had better lives because of her.  She is a symbol of civilized behavior, logic, and compassion mixed with wisdom.

Honor Athena with crystals that depict the things that were important to her:  fairness, wisdom, and loyalty.  The colors purple and blue are most often associated with these traits.  Crystals such as Azurite, Iolite, and Lapis Lazuli are well suited.  Use these crystals on altars and in your home in areas where you need the wisdom and strength that Athena can bring to you.