Artemis - Goddess of the Hunt - Crystal Vaults Skip to content

When she was a young child, Artemis, the daughter of Leto and Zeus, asked her father to give her the mountains and the forests. Having the request granted, when she grew up she lived in the wilderness and became a skilled huntress. 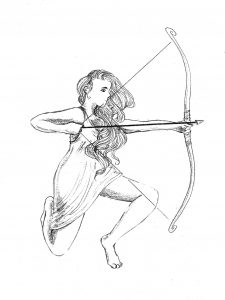 is one of the most revered goddesses, who lived in her own way following her own strict code of moral behavior. She swore an oath of chastity which she kept her whole life. She is an excellent role model for young girls and can give them the strength to accomplish their goals on their own terms.

One story told of Artemis tells of a time when she was bathing and was spied upon by Actacon. She took great offense and turned him into a stag and set his own hounds upon him! She was protecting both her honor and her chastity.

Another story relates how she protected young women. Once the god Bacchus got angry at a mortal and swore he would kill the next one he saw by setting tigers upon him or her. A young woman named Amethyst was the next to pass by. She was on her way to give honor to Artemis. To protect her, Artemis turned Amethyst into a statue of crystal. Seeing the damage he had done, Bacchus, the god of wine, cried purple tears and turned Amethyst purple. Because of this story, Amethyst crystals are used to honor Artemis. They are used on altars with white candles honoring her chastity.

In addition, Dendritic Quartz is used to honor Artemis as it reminds us of the forest she loved her whole life.

In later times, Artemis was known as the Goddess of Childbirth and she is reported to have aided her mother in the delivery of her brother Apollo. Her comfort is sought by women in labor.