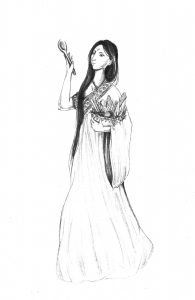 Annapurna is the incarnation of the Hindu goddess Parvati, wife of Shiva. Anna means “food” in Sanskrit and purna means “filled completely”.  Annapurna is the Goddess of the Kitchen and of Cooks.  You will often find statutes to her in Indian kitchens.

The worship of Annapurna goes back to a time in which the earth was in danger of all food disappearing.  Lord Brahma and Lord Vishnu were worried about the potential for the human race starving to death.  They awakened Lord Shiva and asked that he solve the problem.  Lord Shiva knew exactly what to do. He summoned the goddess Annapurna to Earth and begged her for food. She gave him the food and Lord Shiva gave out the food that was given to him.

She promised Lord Shiva that she would continue to nourish the people of the sacred city of Kasi in a way taking care of them before death, then in return he would give the people of Kasi the ability to attain Moksha (the highest form of existence).  Some Indian art depicts this bargain.    On a temple in India, Lord Shiva is seen begging with his begging skull, asking Annapurna to provide him food that gives energy to achieve knowledge and enlightenment.

Annapurna symbolizes the divine aspect of nourishing care. She is often depicted with a jeweled vessel containing food in one hand and a spoon in the other to show the food among her devotees.

It is believed in India when food is cooked with the spirit of holiness it becomes alchemy. Annapurna blesses food and converts it to Amruta which is the Sanskrit word for delicious and healthy food which gives immortality.  Call upon Annapurna to bless your food and food preparation kitchen.

Because she is the Goddess of the Kitchen and Food, the Emerald is an excellent gemstone to use to honor her.  It has the bright color of healthy plants and its legendary beauty brings nourishment to our souls.