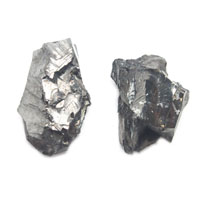 Shungite was formed billions of years ago in the Paleoproterozoic Era. It is only found one place in the world, Russia, where it extends over a vast 3,000+ square mile area. It was first described from an ancient deposit near Shunga village, in Karelia, Russia, from where it gets its name.

Shungite contains trace amounts of fullerenes. Fullerenes (also known as buckyballs) are molecules composed entirely of carbon, in the form of a hollow sphere, ellipsoid, or tube. All carbon, which Shungite is 98% carbon, was stardust at one point. So, it shouldn’t be surprising that fullerenes were recently found in young planetary nebulas as well as clouds of cosmic dust surrounding distant stars.

It should also be noted that Shungite is the only known natural source of fullerenes on Earth. With all of this information, it is likely that Shungite was born in outer space and landed on our planet (probably in the form of a meteor) billions of years ago. This gives Shungite unique healing properties unlike any other mineral in its class.

Shungite has been used as a folk medical treatment since the early 18th century. Peter the Great set up Russia’s first spa in Karelia to make use of the water purifying properties of Shungite, which he had himself experienced. He also instigated its use in providing purified water for the Russian army. The anti-bacterial properties of Shungite have since been confirmed by modern testing.

We have Shungite crystals and essences so you too can use this ancient healing mineral. You can keep reading more below to learn more about Shungite’s healing properties.

Shungite with its natural inclusion of fullerenes acts on a systemic level. They act as an adaptogen, operating both at the cellular level and at the level of the whole human body.

“An adaptogen is a botanical that greatly improves your body’s ability to adapt to stress, whether it’s a hectic schedule, heat or cold, noise, high altitudes or any number of other stressors. This elite class of herbs impart strength, energy, stamina, endurance, and improve mental clarity.” —Chris Kilham, The Medicine Hunter

Adaptogens are herbal pharmaceuticals. They work to counteract the effects of stress in the body. Stress causes very real physical changes in the body, including harming the neurological, endocrine, and immune systems. Adaptogens have stimulant properties that help counteract those harmful effects.

Place a Shungite pyramid near all electronic devices—such as your television, computer, microwaves, radio receivers, wi-fi hot spots, etc. to neutralize any EMFs.

One of the most beneficial uses of the Shungite metaphysical properties is to protect against electrical magnetic fields, also known as EMFs. We are constantly surrounded by technology—cell phones, computers, televisions, Wi-Fi and the list goes on and on. Each of these radiate man-made, EMFs. Many people experience EMF sensitivity, and EMFs have been linked to constriction of blood flow to major organs, poor digestion, and immune systems, increased blood pressure, heart rate and blood sugar, arthritis, anxiety, and depression. Apple even has a disclaimer encouraging you to not hold your phone directly to your head. Fortunately, there is protection from EMFs.

In layman terms, Shungite has a reputation of being able to absorb and neutralize these frequencies due to its components on a molecular level. It is the only natural material in existence to have the presence of hollow molecular carbon cages, known as fullerenes, embedded within this mineral, which allows it to neutralize the EMFs. The scientists who discovered fullerenes won a Noble Prize in Chemistry in 1996. The natural existence of fullerenes remained unclear until it was verified in deposits of Shungite. YES! Finally! It’s true! The science and the crystal worlds have finally come together. The bottom line is that using Shungite is something you can do now to assist with the vast EMF issue in our world.

The first step to introducing Shungite into your life is to place it next to your phone outlets or in rooms with lots of electronics. Place a piece of Shungite on the back of your cell phone and on top of your electronics. We have Shungite Pyramids that you can even keep on the dashboard of your car. With so many studies backing its EMF protection, we’ve already covered our office and homes with it.

Uses of Shungite by Type

Uses of the Tumbled Sets 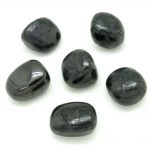 There are many uses for tumbled Shungite stones. For the smaller ones, we love to use them on indoor plants for increasing the vitality of the plant. It can help for water drainage and for the fertilization of indoor plants. Plant several small tumbled Shungite in the soil. Watch for the increase in luster which indicates that the plant is healthier in general and has increased vitality. For larger tumbled sets, they work very well for meditation or placing around the home for protection and energy. The natural, non-tumbled Shungite is especially useful for this purpose since they are so eye catchingly beautiful.

Use of the Pyramids 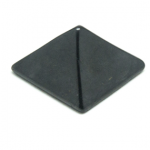 Pyramids are, in general, very much appreciated for the beauty of their form and for the power they release. A pyramid emits its own form wave that carries the Shungite influence quite a distance. These pyramids will emit a wave approximately 8 feet from the base. Use them to guard against electromagnetic effects in a square or rectangle area like a work desk.

Uses of the Spheres 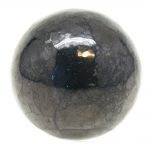 Spheres emit a more uniform and harmonious emanation and are ideal for living rooms and bedrooms. This sphere is good out to about 8 feet. Spheres have a harmonizing power over our energetic body because this form is in resonance with the shape of our vital field. Small spheres of Shungite are often used for relaxation and meditation or paired with other stones as harmonizers.

To use for relaxation, two spheres work best. Place one to your left and one to your right. They need not be too close but should be about the same distance from you. Now sit relaxed or lay down between them. Imagine the harmonizing power of the Shungite as a wave flowing slowly from each sphere. They overlap and cancel each other out where you are sitting or lying. The effect is almost dreamy.

Uses of the Cubes

The cube form is in resonance with the Earth and with the first Chakra, which reinforces Shungite’s properties of rootedness. Their power is said to be less than a pyramid of the same size. These are attuned to the Base Chakra and are used in balance of that Chakra in particular.

To balance the Base Chakra with a Shungite cube, you do not have to place the cube on the Chakra at all. The effects are good out to about 5 feet with a 1.25-inch cube. The effect can be quite pronounced as it provides a calming, grounding feeling.

Uses of the Massage Wands 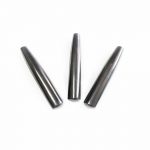 Shungite massage wands are perfect for use on yourself or on others. They can be rubbed around the skin or over specific chakras for stress relief and healing. Shungite helps to detoxify and purify your body and energy field, helping to get rid of negative energies and anything health hazardous to the body, like anxiety.

Uses of the Jewelry 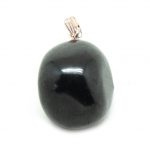 Besdies being beautiful and quite eye-catching, the Shungite Pendant and Shungite Bracelet also provide powerful healing benefits. They both will offer a calming, grounding energy. They will help combat stress, anxiety, and depression. They keep the aura clear of negative energy and the Chakras clear and balanced. You can meditate while wearing the jewelry for adding benefits.

Uses of the Pocket Harmonizers 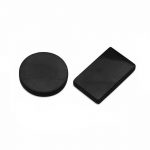 Shungite has three primary uses: protection from harmful electromagnetic radiation, bringing a calming influence, relaxation of the mind and spirit, and, in combination with certain crystals, balancing Chakras. While the pocket harmonizers can be used for all three purposes, they are particularly good for balancing Chakras. Palm stones sit easily on the body near Chakra locations. They are smooth and easily handled. They are easy to clean and easy to use.

We recommend at least one pocket harmonizer to combine with other tumbled stones and small crystals in healing layouts as follows: