Description:  This is a beautiful Earth Tone Moonstone Heart Pendant. Moonstone creates the tides and rhythms of our mother, Earth, and influences our behaviors, emotions and spiritual growth. Moonstone calms and encourages, teaching us the natural rhythms of life.

This pendant was made carefully to attune the Universal Life Force with the harmony of the setting and the metaphysical properties of the stones.  The result is a pendant of high energy and focus.  You will find these to be energizing and refreshing to wear or use. This pendant contains a variety of uses from being used as a necklace to being hung in your vehicle as a good luck charm. The photo shows the typical item you will receive.

Primary Uses: Legendary as the Traveler’s Stone, Moonstone is especially protective of those who travel by night or upon the water when the moon is shining. Frequent travelers should keep one in the glove compartment for safe night driving and as protection against road rage.

Moonstone opens the heart to nurturing qualities as well as assisting in the acceptance of love. It is an excellent crystal for first or new love, and is a comforting talisman if love must be kept a secret. It was also believed to be able to reunite loved ones who had parted in anger. Read much more in our Crystal Metaphysical Encyclopedia entry for Moonstone.

Talisman or Amulet: Known as the Traveler’s Stone, Moonstone has been an amulet of protection since antiquity. It is thought to be most powerful at night and especially on the water when the moon is shining. As a gem, Moonstone signified hope to ancient man. Because of this uplifting quality, it was a popular talisman or amulet for enhancing the personality. Moonstone is a powerful Barrier Filter. Barrier crystals have incredible abilities to help us focus and amplify our efforts to keep undesirable elements out of our lives. Its crystalline structure gives it strength in all directions, allowing it to provide barriers to attack from all directions simultaneously.

Crystals with the earth power of a Filter, absorb positive energy flow but work to keep negative energy away from us. They help us view the world in a “glass half full” outlook, to see the best in others, the beauty in life, and the good in humanity. They keep us focused on the positive in situations and not be overwhelmed by the negative. In our technological world, Filters also work to keep harmful electromagnetic transmissions from sapping our energy and health.

Goddess: Moonstone honors Cerridwen, the Welsh Goddess of Inspiration and Knowledge. She rules the gifts of prophecy and magic, and powers death and rebirth. She is the guardian of spiritual transformation. Moonstone honors Hanwi, The Sioux Moon Goddess. Her name means “Night Sun” and she guards her people during the night, protecting them from harm and from evil spirits. Moonstone honors Nyx, the Greek Goddess of the Night. She is usually seen riding in a chariot, trailing stars, and painting the night sky. Moonstone honors Selene, the Greek Moon Goddess, depicted wearing a crown of the crescent moon, long robes, and carrying a torch. She travels the sky to guide and protect those in the dark. Women in particular associated with Selene, seeing in her the mystery and romance of the evening.

Moonstone also honors Diana, the Roman Goddess of the Moon, and Protector of Animals.

Healing: Moonstone has long been known for its calming, soothing qualities on the emotional body. Its energy is balancing and healing, assisting in the mastery of emotions by bringing them under the control of Higher Will, rather than expressing or repressing them. It also helps identify emotional patterns that are stored in the subconscious and serve as a guardian to contain explosive passions and to stimulate confidence and composure. Moonstones can be placed at the center of the chin (the Moon Center) to create this balance.

Zodiac: Moonstone is the zodiac stone for those born under the sign of Cancer in early summer, from the summer solstice on June 21 to July 22. Cancer is represented by a crab, and people born under this sign are adaptable, loyal, and attached to family. They are gifted with strong imaginations and make great musicians, artists, writers, and composers Cancer is also known as the “Sign of the Prophet” or “Sign of the Teacher.”

Feng Shui: Moonstone utilizes Metal energy, the energy of intelligence, contraction, healing, and creativity. It is the energy of togetherness and crystallization – of ideas, concepts, and groups. It is hard, sharp, and often destructive, yet an essential element in all lives to find our way without being a victim of others. The metal element brings the power of concentration and determination to our lives and our dwellings. Use white crystal energy to enhance any space that you use for concentration, gathering strength, or working with a group. Metal energy is traditionally associated with the northwest and west areas of a home or room. It is associated with the Helpful People and Blessings, and Travel area of your life and dwelling, and with the Creativity and Children area. Its energy of crystallization will solidify your efforts and determination.

Mediation: Meditating with Moonstone takes one deep into the self. Often it reveals the missing piece or pieces of the puzzle of one’s life, parts of the soul that have been left behind or forgotten. It is also ideal for past-life regression.

Other Information: In ancient lore, Moonstone was considered to be a talismanic gem of winter, and in Oriental culture was known as a “phenomenal gem” to be worn on Mondays. Phenomenal gems exhibited a moving line, star, or changes on the surface as the light varied, and was considered to bring good fortune to the wearer. In observance of wedding anniversaries, Moonstones were considered the gift of choice in the thirteenth year. For this number, and for succeeding multiples of thirteen, the gem was believed to counteract the evil influence of the number. Moonstone is the object of special veneration in history as a sacred stone of India. According to earliest traditions, the stone had been set, from the beginning of time, in the forehead of the four-handed god of the moon. Partly from its color, and partly from the influence of the deity it represented, it grew and lessened in luster simultaneously with the waxing and waning of the moon, gaining it the name it still bears, “The Moon-Stone.” 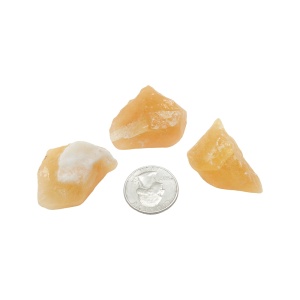