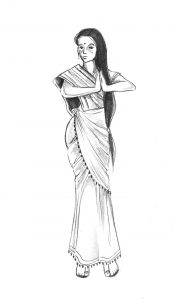 Vac is the magnificent Hindu Goddess of spoken words.She is the daughter of Daksha and her husband is Kasypa.

Vac is the Sanskrit word for speech, voice, talk, or language. She is the creator of the alphabet and of Sanskrit (the language of the Hindu sacred texts).  In early Rig-Veda, Vac refers to the voice of the priest raised in sacrifice.  Vac is also referred to the source of voice.

Vac was the first person to speak the first word and give the first speech to her people. She is also the one who uttered the OM of creation. The OM represents the four states of Brahman. Vac personifies truth and sustains soma (Hinduism).

Vac is often depicted as a mature, graceful woman who dresses in gold. The story goes that one day her husband admired her beauty so much that he grew five faces so he could see her in every angle.  Now we are taking “beautiful” here!

Vac is the mother of the sacred four sacred  Vedas.

Wikipedia tells us that the Vedas contain hymns, incantations, and rituals from ancient India. Along with the Book of the Dead , the Enuma Elish , the I Ching , and the Avesta , they are among the most ancient religious texts still in existence. Besides their spiritual value, they also give a unique view of everyday life in India four thousand years ago. The Vedas are also the most ancient extensive texts in an Indo-European language, and as such are invaluable in the study of comparative linguistics.

The four Vedas are:

Rig- the collection of inspired songs or hymns, main source of information, the book of Mantra,

Sama – liturgical collection of melodies, the book of songs,

Yajur- also a liturgical collection but is made to meet the demands of a ceremonial religion, the Book of rituals, and lastly

Atharva- that consists of spells and charms, the book of spells.

Vac is the source of wisdom and the ability to communicate it to others.  People call upon her when they need help communicating with other.

Traditionally the color violet is associated with wisdom. You have several choices in honoring Vac and requesting her aid.  Violet Sapphire is outstanding.  So is my favorite  –  purple fluorite.  A small crystal of purple fluorite near where you read or study will aid your efforts to commuicate clearly.