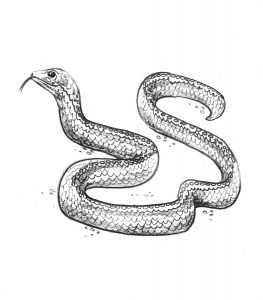 Tiamat is the Sumero-Babylonian Mother and Chaos Goddess. She is the elemental powerful force of chaos that was split in two to form the heavens and earth. She is often depicted as either as a serpent or a dragon. Tiamat is the personification of the primordial waters from which all life was formed.

The creation legends of the Babylonians tell the story of Tiamat’s being wed to Apsu (seems to mean “far waters”) and giving birth to the original deities. However, these children were loud and annoying which bothered Tiamat greatly. Apsu, her husband, tried to convince her to kill them with his help to create the heavens and earth. She didn’t agree to do that until Apsu’s death.

The younger deities learned of their parents plan, and a great battle ensued. Apsu was murdered by his son, Ea, but he couldn’t defeat Tiamat. So he got help from his son Marduk who battled Tiamat.

In the battle, Tiamat opened her mouth to swallow him as he approached her but he threw a storm into her mouth. Marduk then killed her by shooting an arrow into her belly. Marduk then cut up Tiamat’s body into pieces to create the heavens and earth. Marduk then became the “King of the Gods” in Babylonian legends.

For the Babylonian sailors, the seas divided the sky and the earth at the horizon. Splitting the primordial sea to create the heavens and the earth makes sense.

To call on the creative power of Tiamat, use Amazonite. It is a bright green or blue-green gemstone that inspires creativity. It also symbolizes new beginnings bringing you the power to find new paths in your life.

Call upon Tiamat to help you in dealing with difficulty. Use Emerald or other gemstones made of Beryl to bring Tiamat to your side as you fight through mental and physical difficulties.