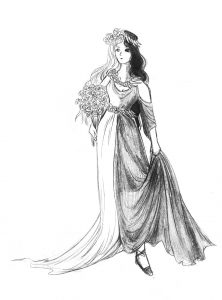 Daughter of Demeter and Zeus, Persephone is the beautiful goddess of spring.  She is called Kore: Beautiful Maiden, She is also the Queen of the Underworld.  Her story is one of abduction, love, grief, and celebration.

Persephone was a young goddess that lived apart from the others and delighted in picking flowers in the woods.  She was honored as Kore, meaning “Beautiful Maiden.”  She was Demeter’s daughter, and Demeter loved her truly.

Hades, the God of the Underworld wanted Persephone to become his bride. One story points a finger at Aphrodite, who fearing that Persephone would remain a virgin, instructed her son Eros (Cupid) to shoot his sharpest arrow through Hades’ heart.

Afraid that Demeter would not allow her to depart to the Underworld with him, Hades abducted Persephone while she was picking flowers.  Again, some stories say that her father, Zeus was mixed up in the abduction.  Some accounts say that seeing that Hades loved her, and knowing Demeter’s temper, Zeus suggested the abduction to Hades.  We shall never know.

Demeter, upset that her daughter was gone, went out to the ends of the Earth to find her child.  Demeter soon learned that Zeus allowed Hades to marry Persephone. Grief and fury overwhelmed Demeter when she heard the news. Demeter halted all plants from flowering and ripening. She created winter for the first time. Zeus couldn’t let the Earth die so he allowed for Persephone to return home if she had not tasted food in the Underworld.  Unfortunately Persephone had eaten a number of pomegranate seeds that bound her to the Underworld, one month per year for each seed.

Honor Persephone as the Goddess of Spring.  Enjoy and celebrate her return to the world each year.

Spring is a glorious time when the world gets Persephone’s beauty back, and her mother again gives her gifts of growth and harvest.

Persephone should be honored with altars of flowers and with crystals that express the joy of spring with bright colors of green and gold, reflecting the new growth of grain, and the harvest.  Peridot, green Tourmaline, and Dioptase are excellent bright green crystals.

Citrine, Gold, and Topaz are excellent golden colored crystals with which to celebrate the spring growth and coming harvest.