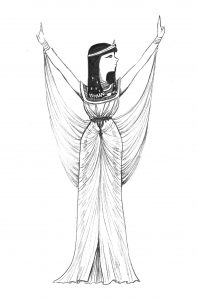 Isis, the most important goddess of Egyptian mythology, is the Goddess of Life, the daughter of Geb, the Earth God, and Nut, the Sky Goddess. She is an immensely popular Goddess that had a tremendous following in Ancient Egypt and Ancient Rome.  Even today, she is widely honored as a Goddess that brings her followers the power of the divine feminine.

Her devotion to her husband and child are legendary.  She presents everyone with a standard of behavior that is to be honored and emulated.

According to the myths of ancient Egypt, Isis married her brother Osiris and they had a son Horus.

Their other brother Seth, god of chaos and the desert, was jealous. He tricked Osiris into lying down in a coffin that was nailed shut and thrown into the Nile.  He survived this attack and was reunited with Isis when she found him in the city of Phoenicia.  Seth attacked Osiris once he returned to their city. His attack this time was far more violent. He cut Osiris into thirteen pieces.

Isis gathered the pieces and turned to Anubis, god of the dead. Osiris was embalmed, wrapped in linen, and magically restored to life.

Some accounts credit Isis for returning her husband to life by being the Mistress of the Four Elements of Life: the Terrestrial elements of Earth, and Water; and the Celestial elements of  Wind and Fire.  Other accounts say her power came from knowing the secret name of Ra.

The story is that Isis tricked Ra, by mixing some of his saliva with mud to create a poisonous snake that bit him causing him great suffering. She then offered to cure him. She informed him that in order for the magic to work she would have to speak his secret name. He then whispered his secret name into her ear, and she uttered his secret name while performing her magic.

Ra was healed, but Isis now knowing the secret name of Ra possessed all his powers of life and death and uses that power to the benefit of her followers. Unlike some other gods and goddesses, Isis was a loving, caring goddess that was nurturing and compassionate.  She is honored today for her steadfastness in taking care of her family and using her power to protect them.

There are several crystals that are excellent for paying honor to the Goddess Isis.  The first is the Desert Rose.  In Ancient Rome she was associated with the Goddess Venus.  Both were honored with roses.  (In fact the popularity of roses today traces to this fact). Carnelian is also well loved.

Secondly, malachite and azurite often are found mixed together bringing the green of the earth and the blue of the sky together, as Isis is the daughter of the Earth and Sky.  Some devotees also use the special Isis crystal – a clear quartz crystal with a five-sided face that is similar to the path of the planet Venus through the heavens.  Whatever crystal you chose, the influence of Isis can be helpful to you in caring for your family.