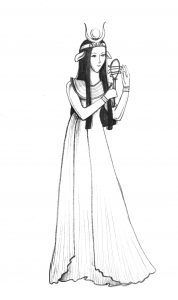 Shop for crystals to honor Hathor

Egyptian goddess, Hathor, is the daughter of Nut and Ra. Her name means “House of Horus.” Horus, her husband in early Egyptian legend, is the sky god whose one eye was the sun, and the other was the moon. Hathor is often depicted in the form of a cow, or a woman with cow ears and horns with a sun disk between them.

She is shown this way because Hathor was associated with the Milky Way – which the Egyptians believed was a “river in the sky” similar in a way to the Nile that flowed through the Earth in Egypt. Because of this she became associated with the annual flooding of the Nile – an event that brought new life to the valley as the floodwaters brought needed nutrients needed to keep the valleys fertile.  In this aspect she is linked to the dog-star Sothis who’s rising above the horizon heralded the annual flooding of the Nile.

Hathor was one of the most ancient of the Egyptian Goddesses, and one of the most popular.  Ancient Egypt Online notes that “She was known as “the mistress of life” and was seen as the embodiment of joy, love, romance, dance, music and alcohol.”  She was sort of the Goddess of A Good Time.

Hathor is often seen caring a Sistrum, an ancient musical instrument, and is often honored as a special Goddess of Musicians.

Hathor was associated with turquoise, malachite, gold and copper. As “the Mistress of Turquoise” and the “Lady of Malachite” she was the patron of Egyptian miners.  She was a happy, powerful Goddess, who enjoyed life, and gave freely of herself to the people of Egypt.

Hathor is caring goddess, a mother Goddess, and a Goddess that brings both fertility and joy to life.  Her story is complex and evolving.  She will bring renewal, joy and a love of the good things in life to you.  Honor her with music, turquoise and malachite stones, and she will bring you a new life of joy and prosperity.

Shop for crystals to honor Hathor.