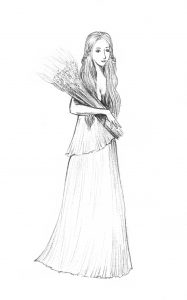 Beloved, and widely worshiped, Demeter, the Greek Goddess of the Harvest, is the daughter of Cronus and Rhea. She brings an end to the barren wintertime, filling the fields with life-giving grain.  Those who realize the gift of the earth’s bounty each year honor her.

Demeter’s first love was Zeus, and with him she had two children: Persephone and Iacchus.  In Greek legend, Hades, God of the Underworld, kidnapped Demeter’s daughter, Persephone. Hades wanted Persephone to become his bride. Demeter, upset that her daughter was gone, went out to the ends of the Earth to find her child.  Demeter soon learned that Zeus allowed Hades to marry Persephone. Grief and fury overwhelmed Demeter when she heard the news.  The Earth reflecting her sorrow, halted all plants from flowering and ripening. Her sorrow had created winter for the first time.

Zeus couldn’t let the Earth die out so he arranged to bring back Persephone. He sent Hermes to Hades in the Underworld. Hermes was successful in convincing Hades to allow Persephone to return to her mother.  However, secretly Hades had Persephone eat some pomegranate seeds.  These bound her to him.  Each year for four months Persephone must return to the underworld. So every time Persephone leaves Demeter takes away the gifts that she had given the world making it winter, but what when she returns Demeter also returns the gifts making it spring again and filling the fields with ripening grain.

Demeter is believed to have taught mankind the arts of sowing and plowing during the time she was searching for her daughter.  Because she is the Goddess of the Harvest, it is traditional to sacrifice the first loaf of bread to her in thanks.

Garnet is an excellent crystal to use in honoring Demeter.  Use the dark red ones such as pyrope and almandine.  These are similar in color to pomegranate seeds that have bewitched her daughter Persephone. They should be used with some small crystals that are golden representing the ripening grain, such as citrine or topaz.