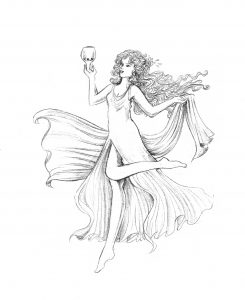 Cybele is the Roman Earth Mother. She is a goddess of embodies the fertile Earth. She was originally Phrygian, the goddess of caverns As the Earth Mother Goddess, she is the Goddess of Wild Animals, particularly bees.

Cybele’s was the first festival of the Roman calendar, the Festival of Joy. And it was a festival! The celebrations were wild, emotional, and filled with drinking, dancing, music, sex and bloody sacrifices. Except for the sacrifices, Spring Break seems to be a modern day celebration of Cybele’s Festival of Joy.

Interestingly, her most devoted followers were so taken with her that they would castrate themselves and dress as women. A bit extreme, I think.

If you need someone to look after you on Spring Break, take a few pieces of Jet, and remember to ask Cybele to watch out for you.

learn about crystals, get exclusive discounts, and more