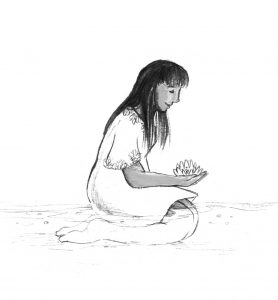 In Aztec mythology, the world has seen five suns or creations. The first four correspond to the four elements, earth, air, fire, and water. Chalchiuhtlicue as the Water Goddess ruled over the fourth sun. She ended that creation by releasing fifty-two years of rain to flood the Earth. She protected humanity by changing the people into fish so they wouldn’t drown.

Chalchiuhtlicue is the Aztec water goddess. Her name means “Jade Skirt” or “Lady of Precious Green”. She’s the mother of lakes, streams, and rivers. People sayshe dresses in blues or greens decorated with water lilies. She is sometimes depicted holding a rattle in her hands.

Chalchiuhtlicue is a fertility deity. She greets the birth of children gives them their first bath. She seeks to protect children, and could be considered a Goddess of Young Children.

Chalchiuhtlicue’s husband is Tlalco, the rain god. Unfortunately in the Aztec culture, many children and babies were sacrificed to
him to bring the rain to the crops. It was believed that if the children cried before their death, it was a sign that rain was coming.

Chalchiuhtlicue is mainly honored by those who make their livings from water. Her shrines and temples were built near streams.

Ask Chalchiutlicue to protect your children and to watch over them carefully.

Honor Chalchiutlicue and request her help using Jade. If you don’t have Jade, any Green crystal will work fine.