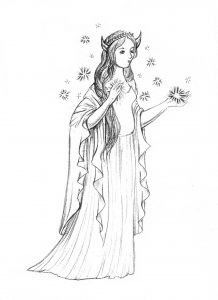 Astarte, the Mesopotamian (Phoenician) Goddess of  Fertility, Love and War, is known in many cultures and by different names such as Astarot and Astoreth.  The Greeks probably changed her into the Goddess of Love, Aphrodite. It’s said that she is the incarnation of the Babylonian Goddesses, Ishtar and the Sumarian Goddess, Inanna. By all accounts she is one of the major Goddesses of many cultures.

Befitting her importance, King Solomon built a temple to her.  To discredit her, she is called the “Abomination” in the Bible.

She first appears in Egyptian mythology. She then grew popular was adopted by the Mesopotamians that lived between the Tigris and Euphrates rivers.  Even though she was worshiped in ancient times, she is still being worshiped today.

Astarte literally means “star”. She is said to be the Queen of the Stars.  She, as the moon, is said to rule over all the bright stars that are the “astral” bodies she gave the souls in heaven.

Astarte’s energy and influence is greatest at the crescent moon.

Her father is the Sun God, Ra, and her husband, with whom she had many children was Seth. Astarte rules the spirits of the dead, passion, marriage, sexual encounters, and power of feminine independence.

She is sometimes pictured wearing cow horns to symbolize fertility and dominance. Her symbols are the sphinx, dove, star, lion, horse, bull, and the egg.

Astarte can help with love situations that are troubled. She helps people by keeping lovers faithful with each other.  She is a strong goddess that can help with relationships.