Description: Highly polished and unique Black Jade Hand Piece. Jade generally occurs in creamy white, mid- to deep olive green, brown and black. Arizona Black Jade hand pieces are from a remote location in the Bradshaw Mountains south of Prescott, Arizona. Black Jade is composed of the minerals Nephrite and barkevikite with added iron in the form of magnetite which produces the rich, deep black color. This gem stone is gathered and tumbled using a unique process to create hand pieces with very user friendly shapes. They are a pleasure to hold and meditate with. Once the stone is in your hand, it is hard to put it down. Arizona Black Jade is very grounding, reduces tension, and enhances strength and focus. Each piece is respectfully gathered and carefully finished to enhance the energy potential of every stone. You will receive the typical item shown.

Primary Uses: Black Jade is cherished as a protective talisman, assuring long life and a peaceful death, and is considered a powerful healing stone. An amulet of good luck and friendship, Jade signifies wisdom gathered in tranquility, dispelling the negative and encouraging one to see oneself as they really are. Black Jade is also an important tool for looking inward. It allows for honest self-evaluation and helps absorb and transform unhealthy and destructive emotions. 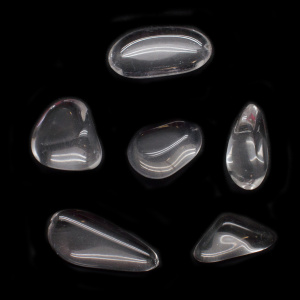