Description: Blue Tourmaline increases the ability for clear and honest communication, and lends the courage to speak from the heart. It encourages an open mind and tolerance for others’ differences and weaknesses, embracing a love for truth, ethics, and a sense of responsibility and service to humanity. It promotes living in harmony with all aspects of one’s environment. You will receive the exact item shown.

Primary Uses: Blue Tourmaline evokes the tranquility of deep blue water and gliding well beneath its surface. It invites surrender of all thought to the solitude of liquid silence, a graceful world of letting go… then rising to the light. It is also known as Indicolite, a variation of the original Indigolite, and refers to its deep blue color. Rarer than other Tourmalines, it forms in shades of light to dark blue, some with a tint of turquoise.

In the metaphysical world, Blue Tourmaline is a crystal of Spirit and peace, providing for deep meditation and bringing past hurts to the surface for healing. It encourages the release of emotional bonds and frees the mind to explore a higher consciousness and spiritual connection.

Only 1 left in stock

Talismans or Amulet: Tourmaline is a Seeker Energizer Crystal. Seeker Energizers are fantastic energy conduits of the Universal Life Force that help you have the energy and determination to succeed in seeking
new changes in your lives. It protects you when you seek to keep negative energy away from you and maximize the effects of positive energy on your life. If you are suffering from fear, particularly fear of physical injury, keep this tourmaline near you for protection. It will help guard and protect you and give you the energy you need to be strong and safe.

Goddess: Blue Tourmaline honors Al-Uzza, the Nabataean Moon Goddess of Full Moon and Mothers. She is also the Most Mighty Goddess and maiden warrior form in the triple goddess with Allat and Manat. She is a fertility goddess and protector, and the ruler of wild beasts.

Blue Tourmaline might also be used to honor Whope, the Lakota Sioux Goddess of Peace. She is not only the goddess of harmony but also of meditation and friendship.

Healing: Tourmaline is a purification crystal. It is one of the premier healing stones. It is very popular and extensively used in the healing arts. It clears and purifies negative energy better than any other stone. It has amazing properties of relieving both mental and physical stress, sort of like a “stress absorber.”It is also one of the most used stones for grounding one’s energy to the power of the Earth. Unless you stay grounded in the planetary energies you are likely to suffer from stress, listlessness, and feeling of being “disconnected” and alienated.

Zodiac: Tourmaline is associated with Libra. Wikipedia tells us that Libra (♎) is the seventh astrological sign in the Zodiac, originating from the constellation of Libra. In western astrology, this sign is no longer aligned with the constellation as a result of the precession of the equinoxes. In astrology, Libra is considered a “masculine”, positive (extrovert) sign. It is also considered an air sign and is one of four cardinal signs. Libra is ruled by the planet Venus (which also rules Taurus). Being the seventh sign of the zodiac, Libra has been associated with the astrological seventh house.

Individuals born when the Sun was in this sign are considered Libra individuals. Libras are commonly referred to as feisty and fiery individuals. Under the tropical zodiac, the Sun enters Libra at the moment of autumnal equinox by definition on September 23, leaving it on October 22. Under the sidereal zodiac, it is currently there roughly around October 18 and November 16.

Feng Shui: Blue Tourmaline has Water energy. Water energy is symbolized by blue and black. Use these colors of crystals to enhance any space that you use for repose, calm reflection, or prayer. Use blue or black crystals to bring the flowing energy of the water element to areas of your home and life that are focused on realizing your potential. Water energy is traditionally associated with the entry or the North area of a home or room. It is associated with the Career and Life Path area. Its flowing energy will assure a balance of energy as your life unfolds and flows.

Meditation: Tourmaline is one of the most common meditation crystals. For dedicated individuals, meditation with Blue Tourmaline can open doors to the highest spiritual realms, offering experiences of ecstatic rapture. For those who have difficulty returning to a grounded state, holding a piece of Tourmaline is recommended.

Blue Tourmaline can also facilitate deep meditation and a Zen-like state of illuminated emptiness. It aids one in releasing attachment to outcomes as well as to the past and is an ideal crystal for exploring past lives in order to resolve current emotional problems.

What Other Authors Say: Other practitioners report that Tourmaline promotes an appreciation for the many wonders that life has to offer, encourages patience and openness, and heightens our appreciation of our fellow man. Robert Simmons in the “Book of Stones” reports that Tourmaline is a grounding and negative energy clearing stone.

Melody concurs, saying in “Love is in the Earth”, that Tourmaline repels and neutralizes negative energy. She also notes it is a protective stone against the “spells” that others may direct at you.

In “Stone Power”, Dorothee Mella finds it to be excellent to relax a stressful mind. 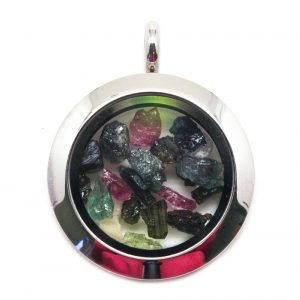 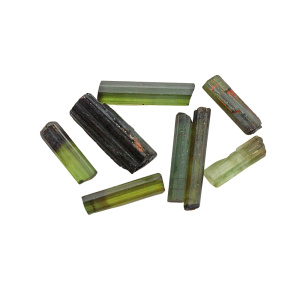